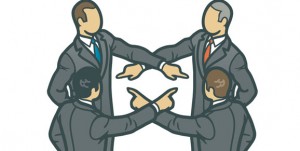 The servant-leader is servant first. It begins with the natural feeling that one wants to serve. Then conscious choice brings one to aspire to lead. The best test is: do those served grow as persons: do they, while being served, become healthier, wiser, freer, more autonomous, more likely themselves to become servants? And, what is the effect on the least privileged in society; will they benefit, or, at least, not be further deprived? (Greenleaf, 1977/2002, p. 27)

There are a number of reasons why servant leadership is effective and I believe that one of the primary reasons for its effectiveness is accountability.

When accountability is demonstrated by someone, it is an indication that they understand that they are part of something that is bigger than him or herself. When leaders hold themselves accountable and they are accountable to others regardless of the position they hold relative to others, it establishes them as true leaders.

When accountability is demonstrated by someone, it is an indication that they understand that they are part of something that is bigger than him or herself.

Servant leadership naturally produces accountability because the servant leader is concerned about those they lead – are they growing? Are they better off now than they were before? The servant leader is not consumed with whether or not they maintain their status or whether they “keep their image up.” It is more about the individuals they lead and the organization as a whole.

Do you want to turn your organization around? Or maybe turn it on its head? Be a servant leader. I can guarantee you will begin to see changes in individuals and then in the organizational culture. Before long, your organization will be known as the place where people would love to have a job.